A place in the FA Cup fifth round is up for grabs as Palace welcome Hartlepool United to Selhurst Park, as the Eagles look to take one step further towards Wembley.

It’s been more than 15 years since these two sides last met: an early League Cup tie in September, 2004 which saw Palace scrape through after extra-time. After Hartlepool took the lead at Selhurst Park, the hosts struck back through Dougie Freedman late on, taking the game into extra time. Tom Soares hit the winner with 10 minutes remaining to send Palace through.

Hartlepool were the victors the last time the two sides met in the FA Cup however, winning by a solitary goal in 1993.

Palace entered the winter break with a sense of frustration, fresh from the disappointment of their defeat to Liverpool at Selhurst Park. Despite a second-half display which saw them threaten for extended periods, a series of controversial decisions snuffed out any possibility of a memorable recovery.

Nonetheless, the Eagles come into this game buoyed by the possibility of an FA Cup run. They were made to work hard last time out at the Den, coming from behind to see of Millwall courtesy of goals from Michael Olise and Jean-Philippe Mateta.

Mateta has since made his switch to Selhurst Park permanent, signing a four-and-a-half-year deal to seal his move from Mainz. His form has been impressive since breaking into the side over the festive period, an assist against Liverpool following goals against Millwall and Norwich City. 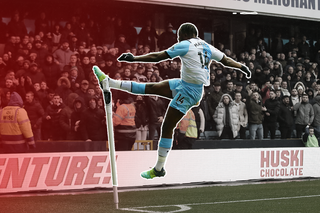 With Jordan Ayew's return from the Africa Cup of Nations and the continued reintroduction of Eberechi Eze to regular first-team football, Patrick Vieira has a wealth of attacking options to choose from.

After an impressive start to the season which saw them challenging for the play-off places in League Two, Hartlepool’s recent struggles have seen them slip to a position in mid-table.

The trip to south London presents a massive opportunity for the club after their third round victory over Lincoln City. They have never reached the fifth round of the FA Cup.

After starring at the Den in the previous round, Olise will be one of the major sources of danger for the visitors at Selhurst Park. His quality cutting-in from the right-hand side is complemented by the running of Mateta, Edouard or Benteke in attack.

In the central areas, Will Hughes has provided a solid base to the midfield three, a platform from which the energy of Conor Gallagher and Jeffrey Schlupp can be most effective.

Hartlepool will be keen to trial their new additions from late in the transfer window. Striker Omar Bogle could lead the line in south London, while midfielders Joe White and Bryn Morris could be in line for appearances after their moves from Newcastle United and Burton Albion respectively.

The official Palace app’s match centre is the place to be for everything you need during the Hartlepool clash. With live stats and alerts, a running match commentary feed and lineups the moment they’re released as well as an instant match report and post-match reaction from Palace TV+, there’s no need to leave the app to follow the Eagles’ efforts.