Crystal Palace defeated Gillingham in the day's second pre-season friendly, with Wilfried Zaha converting from the spot to win the game 2-3. Find out how the game went below.

Please refresh for the latest updates.

Crystal Palace fought off a potential fight-back from Gillingham on Tuesday evening as Wilfried Zaha's brace either side of a Christian Benteke goal saw them earn another victory in pre-season.

The game started fairly slowly before Zaha started to test his markers along the left-wing. After threatening with a cross the winger soon found the net, striking hard from 20 yards and clipping the right post to take the lead.

Soon, goalscorer turned provider as Zaha laid the ball off to Benteke inside the box, setting the Belgian up for an easy, cool strike in from a handful of yards.

Palace looked confident with a two-goal lead and until the break were only unnerved when Elkan Baggott volleyed into the side netting. They could not rely on such a comfortable second-half, however,

The game changed composition just six minutes into the restart, when the hosts pulled a goal back through Olly Lee’s clever back-heel in the box. Then, following seven Palace changes, Gillingham earned a penalty which they duly converted.

The atmosphere stayed at an impressive level for a pre-season friendly all evening, but at no time more than the 67th-72nd minute, when Palace regained the lead through a Zaha penalty.

As full-time approached the south Londoners had a nearly entirely Academy team on the pitch, but the lads held firm to ensure victory; Zaha’s penalty proving enough to prevent a home fight-back.

Academy goalkeeper Owen Goodman played the full Gillingham clash, and said post-match that and the Ipswich friendly have increased his confidence.

“Today I felt more confident, more comfortable. It was different because it was a night game compared with a noon game, so I had to prepare different and it feels different. I thought I did okay and couldn’t do much about any of the goals. I coped, I dealt with it.”

A well-fought game from both teams ends with Palace fighting off Gillingham's potential comeback.

Here's a look at that Zaha penalty.

Palace almost add a fourth when teenagers Gordon and Mooney try to strike from close range, before the latter plays the ball back to Will Hughes.

The midfielder, however, is blocked inside the box. That was several very close chances for the visitors.

It's a cracking atmosphere here for a pre-season friendly, with both crowds enjoying the evening.

And it's in! Zaha sends the 'keeper the wrong way to restore Palace's lead.

This time it's for Palace: Zaha is fouled just as he's about to pull the trigger inside the box.

Lee goes low and hard into the bottom right corner to earn his brace.

Gillingham earn a penalty and Lee steps up.

James McArthur has taken to the pitch for the first time this pre-season as Palace make a host of changes.

It was Green who set up the hosts' goals with some tricky footwork inside the box.

Gillingham have pulled the game to 1-2 thanks to a clever back-heel from Olly Lee, who made the most of the ball pinging around Palace's box.

There have been no changes for Palace, but the Gills have shuffled their pack:

We're back underway here at Priestfield.

The update you've all been waiting for: it's now a brisk 34 degrees, and the clouds are covering Medway - making it a sticky evening for football.

It's been a strong half from Palace with some confident play and two well-taken goals.

It's not easy for either side in this temperature, so expect plenty of changes for the next 45 minutes.

Not yet tuned in? Watch the second-half live here.

In Gillingham's best chance so far, Elkan Baggott volleys a corner into the side netting under pressure from Marc Guéhi.

Take a look at both goals below - and remember, you can watch this game live here.

It's another drinks break, so take a look at the stats so far:

There's no missing the target with this effort: Christian Benteke makes it consecutive games with a goal by slotting home comfortably from inside the box.

The assist comes from Zaha, who laid a soft, low pass onto Benteke's foot from the left of the area.

Cheick Doucouré takes a shot with a tiny gap 25 yards out, but puts it wide of goal.

Both teams are taking a drinks break - it's currently a cosy 35 degrees.

So far it's been a well-contested game, with Palace enjoying the best chances of a relatively quiet start.

Zaha always looked likely to cause trouble tonight, and his opener caught few by surprise. Gills manager Neil Harris has his team around him during the pause, while Roberts speaks with individuals.

Zaha again leaves the home defence behind him by stepping past Cheye Alexander on the edge of the box before firing in off the right post, taking his shot well from 18 yards.

Schlupp starts a swift Palace break and feeds Zaha on the left. The Ivorian skips past Max Ehmer and whips a cross just behind Plange, who would be striking yards from goal if the ball found him.

Just as they did against Ipswich, Benteke and Plange are pushing high and putting pressure on the opposition when possible. The pair have just forced 'keeper Jake Turner into a hasty, long clearance.

Looks like Palace are fielding Jaïro Riedewald as a left-wing-back, with David Boateng on the right. Jeffrey Schlupp is playing on the left of central midfield, next to Eberechi Eze.

Christian Benteke leads the line up-top, with Wilfried Zaha to his left and Luke Plange to his right.

Gillingham v Palace is underway as the heat becomes, only marginally, more bearable.

Reminder: you can watch today's game live via Palace TV+.

And from the man himself...

Plange told Palace TV: “Everyone has made me feel at home – it’s all good, all the players, all the staff. It’s gone well so far… I want to keep improving and improving throughout pre-season for the season ahead.” 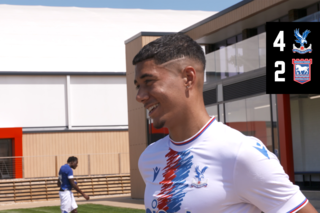 With Plange again starting today, take a look at what assistant manager Osian Roberts said of the young attacker:

"Luke is settling in really well. He got a few goals today and is a real threat. His movement is really good and from his first day here we’ve been really pleased with how he adapted, but at the same time [we're happy with how he] is progressing and taking information on board while working really hard." 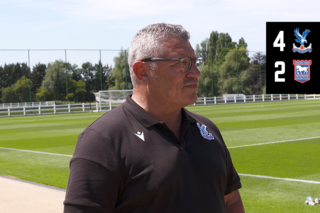 A look at the opposition

Gillingham's team news has landed, and supporters might be disappointed to see former Eagle Stuart O'Keefe does not make the squad.

Recent signings Jordan Green and Ryan Law get the nod under former Millwall manager Neil Harris, as does Cheye Alexander.

The last competitive match between these two finished 1-0 to the south Londoners in 2004.

Team news is in

Palace name a very strong attacking lineup, looking to build on their 4-2 win over Ipswich Town in which Luke Plange bagged a hat-trick, and Christian Benteke claimed two assists.

Remember, you can watch this match live in full via Palace TV+. It's the second game broadcast to subscribers today – find out how to watch live here!

Hello and welcome to the second half of Crystal Palace's friendly double-header today.

Earlier the south Londoners faced Manchester United in Melbourne, and at 19:00 a mixed squad of first-team players who have not travelled to Australia and Academy players will take on Gillingham in Kent.

As we build-up to tonight's clash, check out reaction to the United game below. 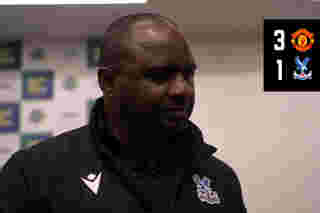