Moritz reveals how Jedinak welcomed him after fluke Palace signing

André Moritz wasn’t meant to sign for Crystal Palace. He wasn’t meant to make 32 appearances, score five goals, net two free-kicks in one game or inspire one of the club’s bawdier chants.

Instead, those accomplishments should have fallen his way at Rangers, assuming Glaswegian creativity matched south London’s.

The Scottish side had just been plunged into liquidation and the country’s fourth tier, and Moritz had gone there to train with a view to signing.

“I really wanted to sign there once I saw the training ground and everything,” he says today while quarantining at a hotel in Singapore, where his wife is starting an MBA (Master of Business Administration). “But I think God had a bigger plan for me.”

Rangers asked Moritz to compete in a friendly with a non-league team before making a contract offer, and the Brazilian declined; he didn’t want to sustain an injury as a free agent. That decision left him in limbo, with Rangers suggesting he didn’t have the dedication to play for the club.

“I had other offers on the table and thought I might go back to Brazil or go to Asia,” Moritz says.

“I got in the car with my agent at that time, Michael Di Stefano, and my father, and we were going from Glasgow to London to get the plane back to Brazil.

“We had a long way to drive, and still had to change the flights. It wasn’t the plan to come to Glasgow and go back to Brazil three days after.

“On the way down Michael received a call from Crystal Palace. Apparently Dougie Freedman had heard about me… Michael said to me: ‘Crystal Palace is one of the highest, most historic clubs in England. It’s a football club in south London, you would love to play there.’

“There is a saying in Brazil: ‘If I’m wet already, why am I scared of the rain?’ I was already in London, I already had a few days to change my flight – so, okay, I’ll turn up at the training ground and show them what I can do.”

Freedman was building the 2012/13 squad which would eventually go from relegation favourites to play-off winners. His signings that summer – most of which were free – are remarkable in retrospect: Joel Ward, Peter Ramage, Yannick Bolasie, Damien Delaney, Danny Gabbidon and Aaron Wilbraham were all on their way to south London too.

But that shot in the dark may well have seemed like a shot in the foot when Moritz began his one-year contract. Palace had ended 2011/12 with three points from their final nine games and started 2012/13 with none from three.

“The club was trying to figure out what to do with that bad start,” Moritz remembers. They figured it out: Palace went unbeaten in their next 14 league games, collecting 36 points to carry them to first place and, eventually, Wembley.

“I think it was the chemistry in the locker room for sure,” Moritz tries to explain. “Once Delaney came in and me and Mile [Jedinak] and the young lads… We had Wilf and Yannick Bolasie, and Joel Ward was there, he’s a warrior. The guy is not human – he’s like a robot or something, works so hard.

“We got people with strong and positive minds and positive vibrations. We said: ‘What’s gone is gone. Let’s start from here – we have something nice, good chemistry and a good team. Let’s put this page in the past and move to a new chapter.’

“For me in my career it was probably the best year of my life. Not personally - I had better years with more goals and assists and minutes - but it was special. It’s not only about football, it was about living in London, making friends – a few of the lads I still talk to week in, week out... Damien Delaney, Jedinak, Zaha, Rambo, Gabs, Alby [Wilbraham], KG [Kagisho Dikgacoi].”

But one man stood out for Moritz who, after three years as opponents in Turkey, he got to know well.

“I knew Mile [Jedinak] – who was [captain] with Paddy McCarthy, but Paddy was injured so Mile was the armband captain on the pitch – he opened his arms and said: ‘Look, you’re home. I know what you can do, I’ve played with you so many times, so just be yourself, be calm and do what you’ve got to do. You will play every match for us and be a really big asset.’ 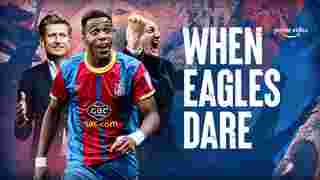 Jedinak’s advice paid heed for his former adversary, who played 32 times in club colours and contributed five key goals, including a pair of free-kicks which secured three points against Wolves.

A lot of his appearances came from the bench, as Moritz was fielded to add attacking muster, threats from set plays and fresh legs to feed a relentless, energetic frontline of Bolasie, Zaha and Glenn Murray.

His quasi-super sub reputation birthed one of the fanbase’s more memorable creations.

“I could hear ‘get Moritz, get Moritz,’ and I thought: ‘What are they singing?’,” the Brazilian says. “I was like: ‘Why are these people telling me to go out?’

“I said: ‘Why do they want me to go out? Am I playing bad?’ My mind was spinning.

“But then someone told me what the chant was, the real one. I was like: ‘Okay, now I get it.’ It’s something good… It was nice, man. Even my parents and family now at home say: ‘Remember that chant Crystal Palace fans used to do for you?’ It was special – the Palace fans were really warm towards me, every time.