After the 2019/20 FA Women’s Championship was prematurely brought to a close due to the COVID-19 pandemic, Crystal Palace Women entered the new campaign with high hopes.

Reflecting on the season as a whole, General Manager Paula Johnson said:

"With the backdrop of COVID-19 and a lot of hard work behind the scenes our season has turned out to be the best yet. Twenty points on the board and seventh in the league. The attitude of players and staff has been phenomenal - a real team effort all round.

"This season saw us progress to the quarter-finals of the Conti Cup and the fifth round of the FA Cup, another first in the history books for CPFCW.

"We really missed the loyal fans but hope we can have them back for what we hope will be a really exciting season next year with some big plans being put in place."

It was an eventful summer for the Eagles, initially securing three new signings through the doors at Hayes Lane: Kate Natkiel from Brighton & Hove Albion, Ffion Morgan from Coventry United and Georgia Clifford from Oxford United.

Two marquee signings from Tottenham Hotspur in Chloe Morgan and Coral-Jade Haines also joined the team before the start of the new season.

A trip to Greenwich was on the cards for the Eagles as they began their season away at local rivals Charlton. Having not played a competitive game for six months, Palace opened their account for the season with a header from Bianca Baptiste to respond to an early Charlton goal.

The Eagles then took the lead thanks to a Cherelle Khassal goal, but a late equaliser for the Addicks saw the first game of the season end in a 2-2 draw.

The first home game of the season was also a London derby, this time against London City Lionesses. The Eagles got off to a flying start under the lights at Hayes Lane, with Lizzie Waldie scoring her first goal for the club in the fourth-minute. The Lionesses pulled one back however, and the match ended 1-1.

Khassal opened the scoring for the Eagles at home to Blackburn Rovers, though it was cancelled out just before the interval. Baptiste netted straight after half-time with a fantastic solo run, but Rovers levelled it once again. Unfortunately, an injury-time winner saw Blackburn leave with all three points. 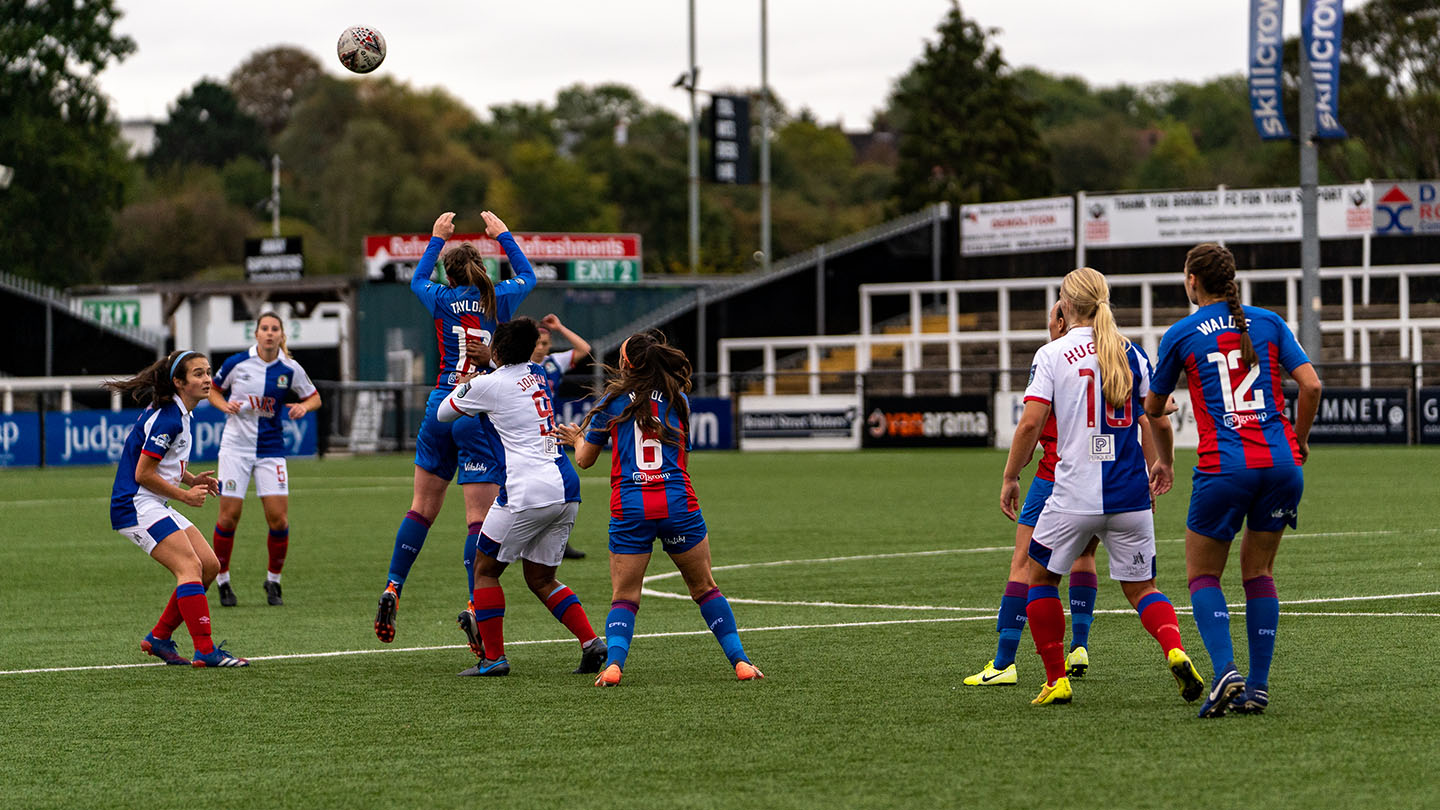 A busy month for the Eagles started with an away trip to the Hive to face London Bees. A brace, including a sensational free-kick, from summer signing Haines along with goals from Siobhan Wilson and Baptiste saw the Eagles record a solid 4-1 win over their London rivals - their first victory of the season.

Three days later, the FA Women’s Super League Continental Cup kicked off. The Eagles faced a midweek trip away at Lewes. They found themselves behind on the hour mark, but substitute Baptiste scored a brace, including a last-gasp 90th-minute winner. The Eagles moved to the top of their group with that win.

With their third match in seven days, Palace found themselves on the road again, this time for a WSL game against Durham Women. But the journey north didn’t prove fruitful as the Eagles fell to a 2-0 defeat.

The final match in October saw the south Londoners return to home soil to face Leicester City. Khassal put Palace ahead with her third of the season, but the early momentum was cancelled out by a Foxes equaliser. The Eagles were reduced to 10 and this proved too much as they were defeated 1-4 by the Foxes.

A month of two halves for Palace began with a trip to unbeaten Sheffield United. After a resolute defensive performance in the first-half, the Eagles’ defence was broken and the Blades ran away 3-0 winners to top the league.

The WSL Continental Cup returned in midweek as Dean Davenport's side welcomed Bristol City to Hayes Lane. A poor first-half saw the Eagles trailing by three goals at the break, however they did manage to pull two back with a Baptiste brace. It wasn’t to be for Palace as they fell to a 2-4 defeat.

The Eagles had to dust themselves off quickly for the visit of Coventry United to Hayes Lane three days later. An own goal two minutes in was followed up by Baptiste netting her eighth goal of the season before half-time. Coventry pulled one back, however summer signing Natkiel scored her first of the season after coming off the bench to seal a 3-1 win for the Eagles.

The final WSL Continental Cup group game for the Eagles saw them come up against London Bees for the second time this season. The Bees took the lead early on at Hayes Lane, however they were reduced to 10 players early on.

Haines scored a penalty to level the scores, whilst Baptiste, Wilson and Khassal got their names on the scoresheet before half-time. The second-half saw Amy Taylor score her first goal of the season and Baptiste secure another brace, resulting in a 6-1 triumph.

The Eagles had a quiet December, after it was disrupted by lockdown and fixture postponements. A visit to Prenton Park to face promotion contenders Liverpool was a tall order for Palace, who unfortunately fell to a 0-4 defeat.

Palace had to redeem themselves in the following fixture away at Lewes and they duly did. After an uneventful first-half, the second-half saw Baptiste score yet another brace at the Dripping Pan. Her goals were enough to see the Eagles emerge as 2-0 winners in East Sussex.

Palace signed Morgan from Tottenham Hotspur in summer 2020. She’s played an integral role for Palace Women both on and off the pitch, with her work off it being nothing short of remarkable.

In addition to being a qualified solicitor, she is also an ambassador for KickOff@3 - an organisation to help female footballers into the sport, an advocate for LGBT and BAME rights within sport, on top of being a board member for Women in Football. Her performances in goal this season have helped the Eagles greatly too, pulling off a number of saves and keeping four clean sheets. 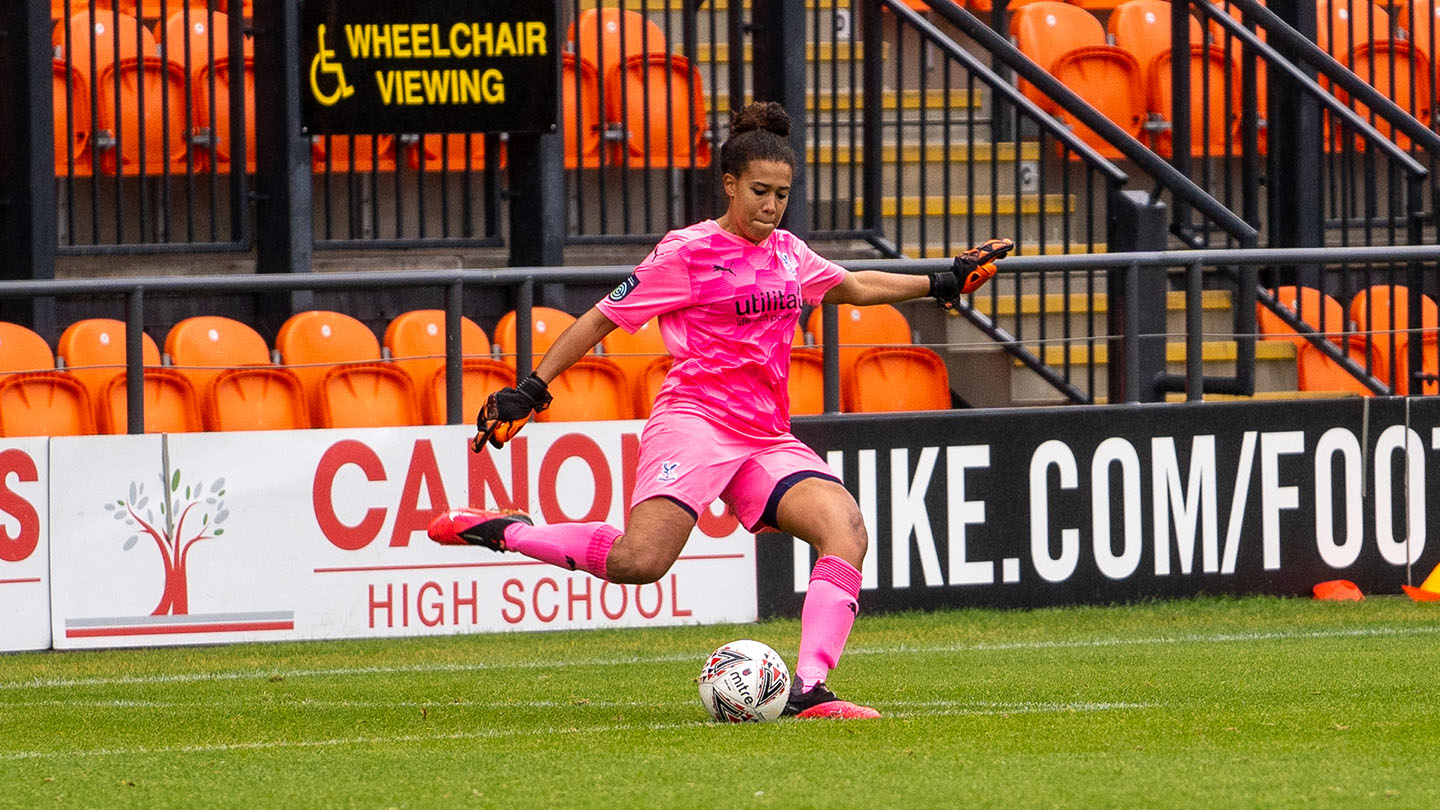 January saw the signing of midfielder Kirsty Barton on loan from Brighton & Hove Albion, the only new arrival during the transfer window. Barton started the first game of the new year against London City. The Eagles went into this clash level on points with City, and neither team could break the deadlock as the game ended in a 0-0 draw.

After finishing second in their WSL Continental Cup group, the Eagles progressed to the quarter-finals to face Leicester City. The Foxes were welcomed to Hayes Lane for the second time this season, and it was a close-fought affair. The tie looked likely to head into extra-time before heartbreak for the Eagles saw them undone by a last-minute winner.

A third game in seven days saw Palace host Durham at Hayes Lane. The Eagles fought to maintain their good home record in the league, however the match was decided by a first-half goal from Durham. 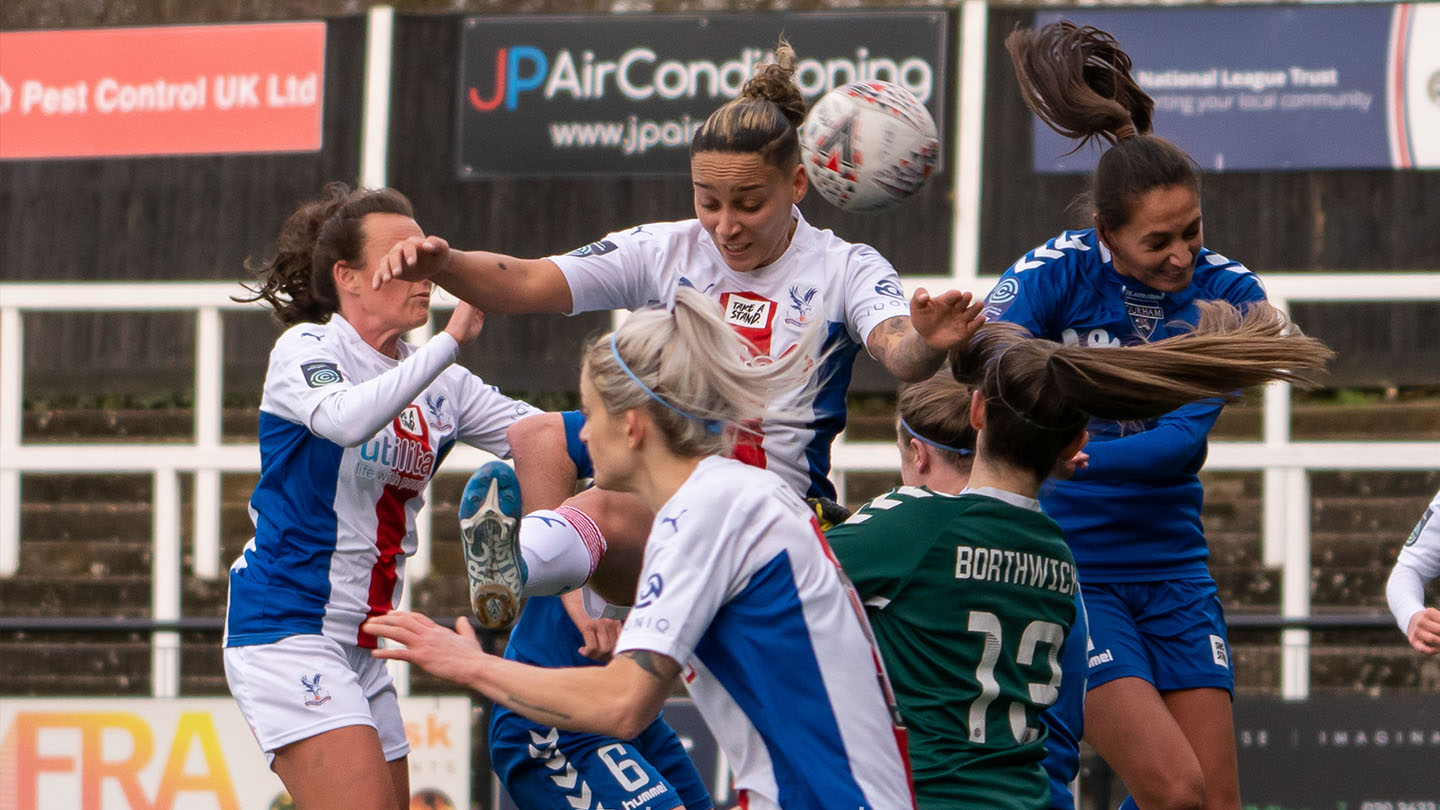 Palace made the journey up the M6 to face Blackburn Rovers at the beginning of February looking for their first victory of the year. Rovers opened the scoring, but Khassal pulled one back for Palace before the break.

An 87th-minute goal from skipper Annabel Johnson saw the visitors take the lead after a cagey second-half, however an equaliser in injury time meant the points were shared.

London Bees were welcomed to Hayes Lane once again midway through February. Palace took the lead early on thanks to leading goalscorer Baptiste. Haines doubled the lead for the Eagles, with Baptiste securing another brace against the Bees to take her tally to 14 for the season.

Haines added another to score a brace herself, putting Palace 4-0 up at half-time. Natkiel scored another in the second-half to complete the 5-0 rout against the Bees.

The last weekend in February saw the Eagles travel to face Leicester City for the second time in a month and for the third time this season. The hosts broke through in the 35th-minute and Palace fell to a narrow 1-0 defeat.

A quiet March started with the Eagles taking on promotion hopefuls Liverpool at Hayes Lane. Natkiel almost scored within the opening minutes, but her shot skewed over the bar. The teams were deadlocked at the break, but just past the hour Liverpool got their noses in front with what proved to be the only goal of the game.

Local rivals Charlton Athletic made their way to Hayes Lane at the end of March. Charlton took the lead early on. The Eagles pressed and pressed to find an equaliser, and it came in the very last minute thanks to an own goal. With the points shared, the south Londoners were within touching distance of securing their safety in the Women’s Championship for another season.

Centre-back Annabel Johnson was named captain for Palace before the start of the 2020/21 campaign, taking the reins from the long-serving Freya Holdaway. She has been in the game for a decade, bringing a vast amount of experience to the squad from her time at Leicester City, Durham and Coventry United.

Johnson is also a seasoned international, having captained Team GB in the 2017 World University Games and won multiple caps for England U19s. 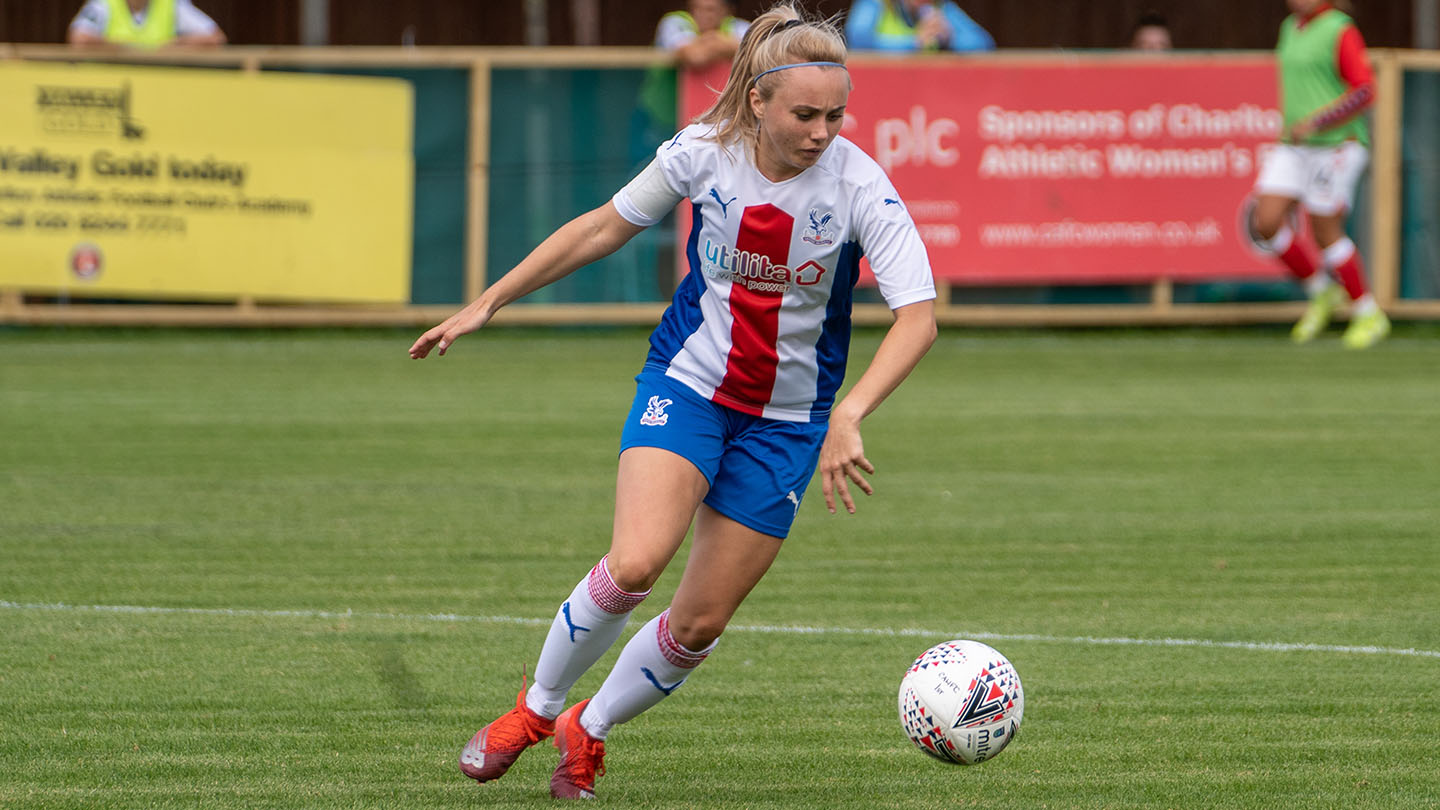 April saw Palace welcome promotion-chasing Sheffield United to Hayes Lane on Easter Sunday. The Eagles started off strongly with Baptiste going close, but the Blades took the lead early on and pressed on to win 3-0.

The Fourth Round of the Women’s FA Cup kicked-off in the middle of April as Palace faced London Bees for the fourth time this season. Davenport's side swept aside the Bees thanks to goals from Wilson, Haines and Khassal within the first half an hour to secure a 3-0 victory to move on to the Fifth Round.

Coventry United quickly took the lead in the final game of April, however Palace hit back with a goal from Khassal 15 minutes later. Coventry reclaimed the lead before half-time and, despite a goal from Haines, there was no way back for Palace. Coventry added three more to win the game 5-2.

May: Lewes Women and Arsenal

The final game of the 2020/21 league season saw Lewes visit Hayes Lane. Palace’s Amber Gaylor broke the deadlock just before half-time, but just after the break Lewes responded to level the scores. The Eagles got their noses in front with five minutes to go - thanks to a goal from Waldie, which proved to be decisive as the game ended 2-1. 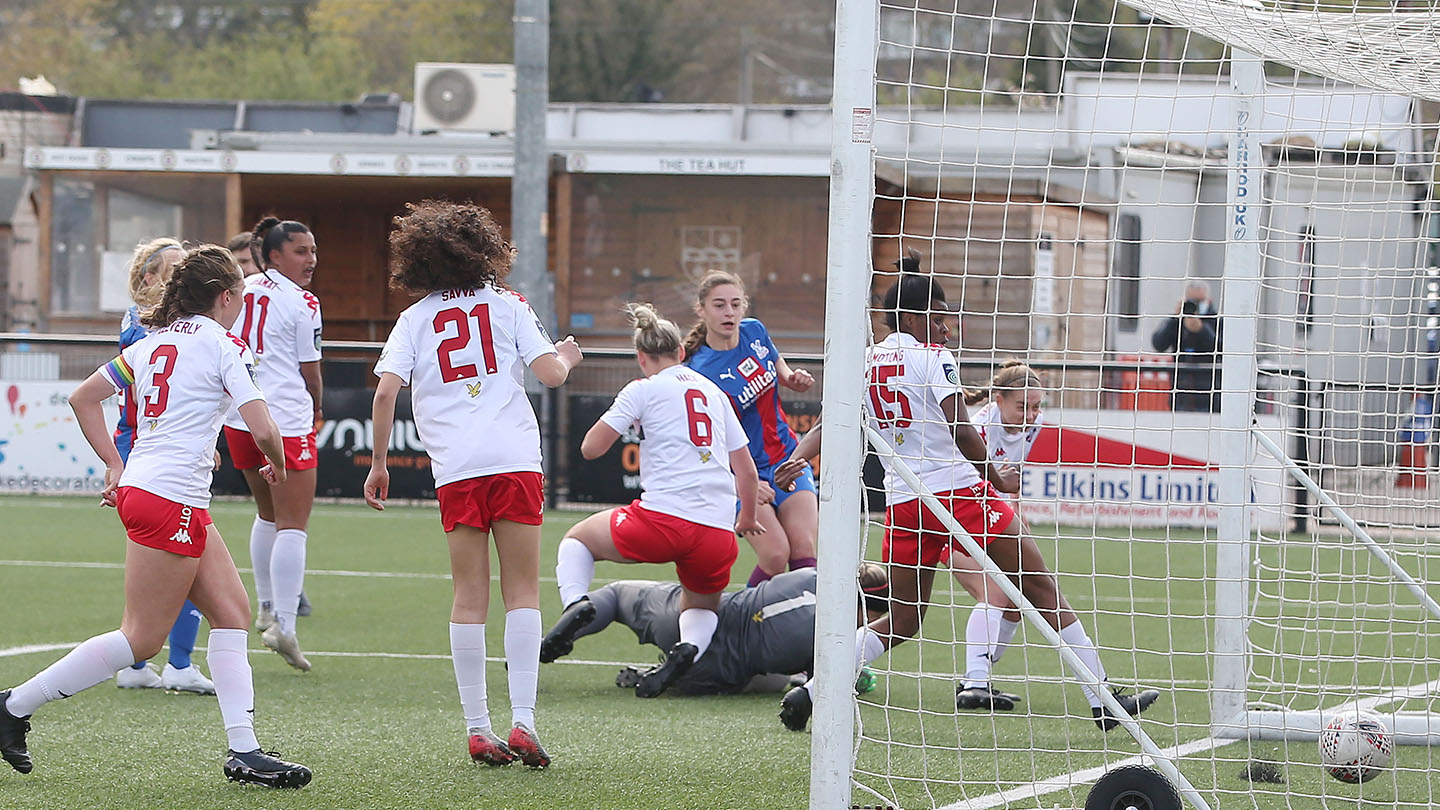 Though the season was over, they still had to face Arsenal in the fifth round of the FA Women’s Cup. The Eagles fell to the 14-time winners.

Overall, Dean Davenport’s side put in a strong showing throughout the season, amassing 20 points from 20 games in a respectable 7th place finish. This will provide a strong base for the Eagles to build from in the 2021/22 season as they seek to continuing drawing closer to promotion.