February kicked off with a series of landmark moments for the Crystal Palace Academy, from professional debuts to new arrivals to big wins – check out all the key news from the club’s youth set-up in the new weekly round-up below.

The FA Cup victory over Hartlepool was a significant occasion for the Academy, as Tayo Adaramola made his professional debut for the club. Replacing Joel Ward for the final five minutes, he became the second Academy player to be given his debut by Patrick Vieira, after Jesurun Rak-Sakyi’s appearance in the Premier League opener at Stamford Bridge in August.

“Right now I'm over the moon," he told Palace TV after the match. “I can’t even explain how I'm feeling. I’m still shocked with everything that’s happened over the past weeks. I'm just happy that I’ve finally done this!” 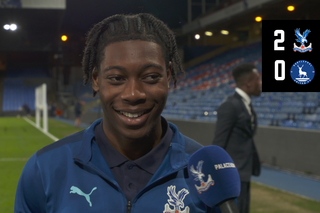 Two tough tests awaited the young Eagles as the Under-18s and Under-23s travelled to north London to take on Tottenham Hotspur.

The U18s set the tone on Saturday, coming out on top in a belter of a clash that saw both sides lead on various occasions and five goals scored within a crazy 20-minute first-half period.

In the end, Ademola Ola-Adebomi’s hat-trick was enough to separate the two and Rob Quinn’s side came away with a 4-2 win and an important three points. 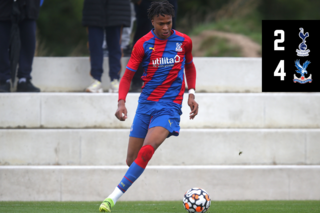 On Monday it was the U23s' turn to head to Spurs, and once again there was no shortage of drama. Scott Banks was the standout player, scoring within 60 seconds to give Palace the lead and then doubling their advantage with a sumptuous free-kick soon after.

In the second-half another sensational effort from a dead ball cannoned off the underside of the crossbar and out to Rak-Sakyi, who completed the scoring in a comfortable 4-1 win. 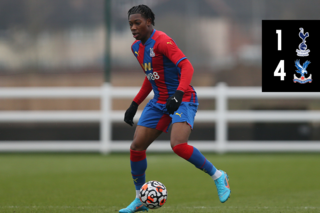 After starting every one of Palace’s Premier League games this season, Tyrick Mitchell was recognised for his excellent form with a nomination for Young Player of the Year at the London Football Awards.

Mitchell is up against teammate Conor Gallagher for the prize, as well as Arsenal’s Bukayo Saka, Spurs’ Oliver Skipp and Fulham’s Fabio Carvalho.

He graduated from the club's Academy in June 2020.

Two new faces arrived at the Academy this week, with Sebastian Joffre and Rian Jamai signing for the club.

Joffre, a versatile 22-year-old Bolivian attacker, and Jamai, an attack-minded 20-year-old American midfielder, both developed at F.C. Florida Prep Academy. Jamai then went on to spend time with Maghreb de Fès in Morocco.

They will both immediately begin a loan spell with Belgian First Division B side RWD Molenbeek to further their development for the remainder of this season.

It’s a huge clash for the Under-23s on Sunday, 20th February as they welcome Manchester United to south London. Paddy McCarthy’s side will look for a repeat performance of their impressive display in the north-west before Christmas, where they ran out 2-1 winners.

After beating Spurs this week, the Under-18s welcome their north London rivals Arsenal to the Academy ground. With the two separated by just two points in the table, it could be a crucial match-up for Palace’s title ambitions.