Academy round-up: International stars, community heroes and what to watch

It's been an international break full of milestones for Crystal Palace's young players - check out all the latest from the club's young side's in the latest Academy round-up!

It was a sensational international break for Palace’s home grown heroes, none more so than Tyrick Mitchell who made his England debut at Wembley against Switzerland.

The Palace defender allowed his mother to fulfil her dream of watching her son play at the ‘home of football’, impressing alongside teammates Conor Gallagher and Marc Guéhi.

It was the first time an England side included three Crystal Palace players in more than 30 years, since Geoff Thomas, John Salako and Ian Wright lined up against New Zealand in 1991.

It’s been a busy few weeks of international duty for the current prospects at the Academy ground, with no fewer than seven players were called up to represent their countries at youth level.

While Mitchell and co. were impressing at senior level, Jesurun Rak-Sakyi and Luke Plange – back on loan at Derby County after signing in January – joined England Under-20s on their trip to Poland, both coming on as second-half substitutes.

Jack Wells-Morrison continued his strong season with a call-up to England’s Under-18s side. He started for the Young Lions in their victory over Sweden, before coming on as a late change in a 3-3 draw with Denmark.

Scott Banks played 45 minutes for Scotland Under-21s at home to Turkey before travelling out to Kazakhstan, where he came on as a second-half substitute in a 2-2 draw.

For Republic of Ireland, Development defender Jake O’Brien and midfielder Killian Phillips joined up with the Under-21s side.

Meanwhile Tayo Adaramola’s remarkable 2022 continued, as he was called-up by Republic of Ireland’s Under-19s side, playing 86 minutes in a 3-1 loss to England.

Recap all the results from Palace’s young internationals by clicking HERE.

Victor Akinwale was the man of the moment as the Under-18s returned to winning ways at West Bromwich Albion, scoring twice in a crucial 3-0 victory. 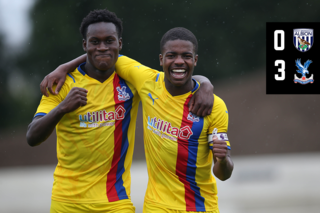 After a tight first-half, Akinwale’s superb solo effort opened the floodgates and set Rob Quinn’s side on their way to three points which will keep them within touching distance at the top of the table.

The fixture list threw up another tough game for the Under-23s after facing Manchester City last week: a London derby against Arsenal at the Academy ground.

After going behind early in the second-half, the young side fought back spiritedly and equalised through Nya Kirby. It was the midfielder’s second goal in as many games.

Palace Under-18s continued to show their support for end of life charity Marie Curie with a minute’s silence on National Day of Reflection.

The players held the silence at training on Friday, 25th March, as an opportunity to reflect on the lives of people lost since the UK lockdown started two years ago.

The National Day of Reflection is led by Marie Curie and seeks to connect and support the millions of people who are grieving around the UK, whether their loved one died from COVID or other causes.

Several Palace youngsters visited a donation centre in south London this week as they helped collect food and supplies to be delivered to the people of Ukraine.

Joe Sheridan and Kalani Barton, both regulars in Palace’s Under-18s this season, were among the players to visit the centre. 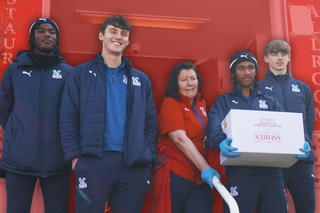 “Just coming here has really opened my eyes to how much work is going on behind the scenes,” said Sheridan. “We’ve got boxes and boxes full of stuff. We had four or five vans coming with food, nappies and things like that.

“It’s just amazing the work that’s going on unnoticed by a lot of people. It has restored my faith in humanity a little bit, how much people have come together to give support.”

After a series of tough home matches the Under-23s are back on the road, travelling to Leeds United on Monday, 4th April (19:00 BST).

At Under-18s level, Akinwale and co. host Aston Villa on Saturday, 2nd April (11:00 BST) as their title charge continues to gather pace – you can check out how the boys get on by tuning in LIVE on Palace TV+.